While responsive text can be built using vw units, the current lack of max and min font-size properties in CSS means that any attempt to do so must be accompanied by a set of media queries to control display of the text at widescreen and mobile viewport widths. This forces vw text to settle somewhat uncomfortably between two extremes, clamped with @media queries.

While SVG has many limitations when it comes to text, it is perfect for “hero” banner elements. There are several ways to create these on web pages:

The best method for adding a title to a page in SVG is to make the SVG part of the page itself:

The SVG should automatically scale itself to its container: you’ll likely need to adjust the viewBox, font-size and x values to have your text positioned across the SVG correctly. (Temporarily placing a border or background-color on the SVG can help in determining the rendered size of the element).

Note that font-size for the SVG is relative to the viewBox, meaning that it scales on resize. Also note that the color of the <text> element is set using fill, not color.

Due to the fact that it’s inline, this approach has several advantages:

You can take things much further in terms of visual effects, while keeping the text editable, as shown in the example at the top of this article.

You can keep also the same SVG code in its own file, and reference it as an image from an HTML document:

Making the image fluid would make the element responsive. There are a few considerations, however:

There may be situations in which the SVG text can’t be retained as text, and must instead be broken apart (in Adobe Illustrator: Type / Create Outlines) and exported as SVG paths. A good example:

This removes any need for embedded fonts, but also eliminates the possibility of easily editing the SVG. It also removes SEO and accessibility, unless the following steps are taken:

Note that the text example at the top of this article uses SVG filters, which means that it will not appear in current versions of Safari. I'll have more to say about this in a future article.

Enjoy this piece? I invite you to follow me at twitter.com/dudleystorey to learn more.
Check out the CodePen demo for this article at https://codepen.io/dudleystorey/pen/rxJwZY 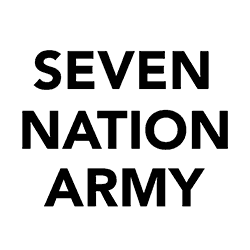