I’ve long idolized Lea Verou. Consummate developer, speaker, spec contributor and toolmaker, Lea’s presentations have long been must-see events at web development conferences around the world. Naturally, I was very excited when I learned she was expanding the title of her most popular series of talks into a complete book, to be published by O'Reilly in May. I had the opportunity to review a digital galley version, available through O'Reilly’s Early Release program. 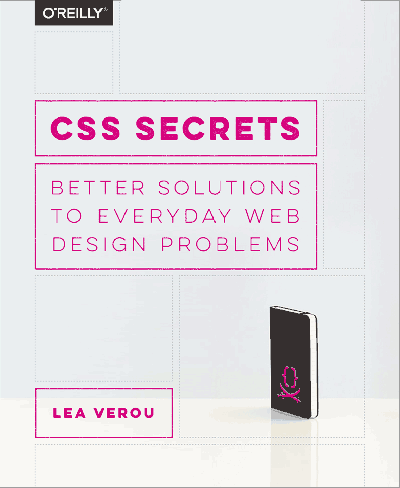 CSS Secrets is not a book for beginners, nor is it a “CSS recipe book”: rather than simply providing solutions, Lea teaches the process of solving problems in CSS. It’s an approach I emulate in my classes: the satisfaction of simply fixing code is hugely outweighed by the value of understanding why a problem occurred in the first place.

As a W3C Invited Expert, Lea starts CSS Secrets with a quick look at how standards are actually developed, putting to rest a few myths and misapprehensions. This perspective is carried through the rest of the book: while chapters are divided into easy-to-read topics (Typography, Shapes, User Experience, etc), there’s also a very handy table of contents guiding the reader as to which CSS specification is used where. 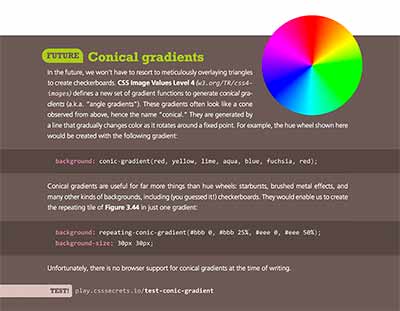 Every page has fresh content that will enhance a developer’s appreciation of CSS, or cause them to re-evaluate the way they work; I was constantly making notes and sketches of creative possibilities from what I learned as I leafed through the book.

Like the very best web development guides, CSS Secrets is not a work that you’ll read once before it’s outdated: the book’s emphasis on problem solving, digressions into small chunks of math and forward-looking nature (the book sidebars several CSS Modules that have yet to achieve significant browser support) mean that it’s a volume readers are likely to come back to over and over again. Right now, I’m finding Lea’s chapters on shapes, curves and transforms particularly inspiring, but there’s a great deal more that I know I will be returning to. 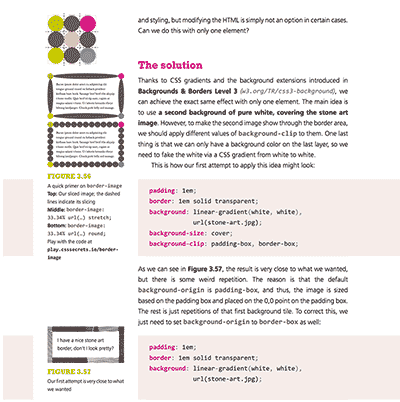 For a very long time, books on web development have been designed and laid out like programming journals. I’m very pleased to see that CSS Secrets continues the recent trend of presenting HTML and CSS at its best: beautiful, exciting, and rich. The book pays the same careful attention to design as Lea’s tools (Prism and Contrast Ratio, among many), with a layout that both informs and delights the reader.

This consideration is also shown in the book’s reflection of the co-operative spirit of web development by the inclusion of the many references and kudos Lea has provided, detailing where another writer has more information on a topic, or was the first to discover a particular technique. (I was thrilled and humbled to learn that I’m mentioned four times in the book.) 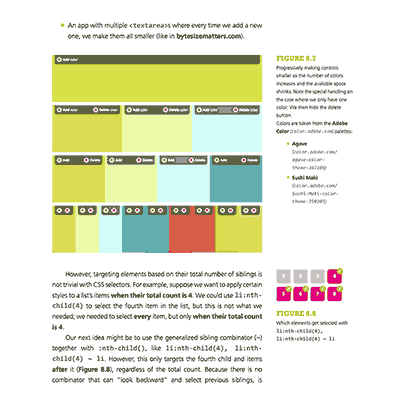 While it’s usually a exaggeration to claim that a work contains “something for every web developer”, the statement is completely true of CSS Secrets: while it never loses its focus on writing great CSS, the book imparts great lessons on accessibility, design, UX principles, writing DRY code, HTML5 APIs, and clever uses of JavaScript along the way. I would recommend it for everyone experienced in front-end development, without reservation.

CSS Secrets is currently available from O'Reilly as an early release: in its current state, the book is very nearly complete, with just a few layout changes to make, a foreword and conclusion to add, and three or four placeholder images to be filled in. Purchasers of the electronic version will automatically receive free updates and changes as the book takes its final steps to publication; I’d urge readers to take advantage of the book’s riches by purchasing sooner, rather than later. The print version of the book can also be pre-ordered from Amazon 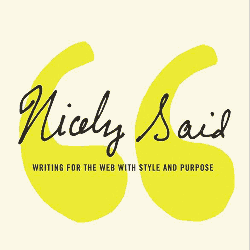