Introduction to Dates and Times in JavaScript

JavaScript doesn’t make these distinctions itself: with the exception of the Web Performance API, all time in JavaScript is derived from a standard known as the Unix epoch.

Most every expression of time on a digital device is derived from the microsecond “tick-tock” of a chip, which keeps track of the so-called Unix epoch: the number of milliseconds that have passed since midnight, January 1, 1970 UCT. You can see this number for yourself in a browser: open up a console window and type:

This ever-increasing number, also known as the Unix timestamp, is the means by which most computer time is measured, with everything else – time in the future, past, and the difference between dates – resolved by conversion into this format, after taking into account other factors such as time zones and leap seconds.

High resolution (1 millionth of a second) timing is also available via the Web Performance API, although that is excessive for most purposes.

This series will explore JavaScript time from the top down, starting with the human-readable formats and working to the micro level. We’ll start by making a simple clock, progressing to more advanced examples. 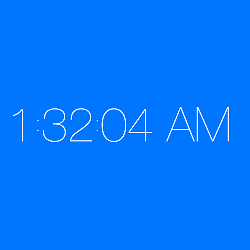