A series of serendipitous coincidences led to my connecting with the Wellington CSS Meetup group while in New Zealand. Unfortunately, I couldn’t make it to the capital until Wednesday evening, so with the kind assistance of hosts Optimal Workshop, I attended in the form of a telepresence rig by DoubleRobotics.

You can watch the presentations above, which I found very interesting: I have a few possible contributions to Laura Monroe’s piece on CSS typography, most especially suggestions for units, but on the whole I enjoyed the talks very much.

Life As A Robot

I found the DoubleRobotics system particularly fascinating. The telepresence rig might best be likened to a disembodied head on a remote-controlled Segway: the “head” is a projection of my face through the screen of an iPad, with the wheels controlled through a simple web page interface and cursor keys, like playing a first person shooter.

Steering the robot was easy, and the “sense of place” was quite good, although people seemed to talk above my head: I’m 6′, and the DoubleRobotics rig stands a little under 5′ tall.

People reacted in very interesting ways to my robotic presence: most were curious, and took it in stride, but a few were deeply unsettled. I suspect that some may have thought that I was invading their personal space with a camera (which I was, technically, although the camera was, in this case, acting as my eyes).

There were a few connection problems, forcing the bot to entered “parked” mode on occasion. Unfortunately the failsafe sometimes failed, forcing me to do the equivalent of a robotic desk-flip, face-planting the telepresence rig into the room*. That was a little annoying, as it caused me to miss portions of the presentations, together with the after-party… although I understand it was amusing to the other guests.

* To their credit, I’m told that DoubleRobotics is sending over a team to look into the problem. 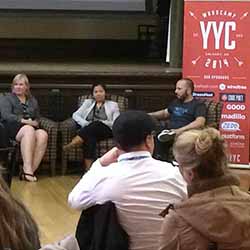