Creating a newspaper or magazine-style layout, in which text flows between multiple columns, has not been seriously approached in web design until very recently. Currently, the technique remains a draft proposal for CSS3.

Continuous multiple-column text design for the web is also somewhat controversial: there is an argument to be made that users have been habituated into reading most web sites like a book, from one edge of the page to the other, and that forcing text into a magazine-style layout is actually a step backwards. However, with a little bit of cleverness, we can actually have the best of both worlds.

First, the text to be divided into columns must be in a single container - most likely, but not exclusively, a div:

Second, our CSS divides this div up into a series of columns. I'll demonstrate the technique without vendor prefixes:

This declaration divides the <div> into two equal width columns, automatically balancing the text between both. The columns are separated by 2em and a black rule five pixels wide. It is a fluid design: the height of the columns changes as text is added or removed, or if the overall width of the container changes, but there are always two columns.

This layout also gracefully degrades rather neatly: if a browser does not understand the properties, the text is simply displayed normally in the container <div>.

A solution with greater fluidity is to set column-width rather than column-count, allowing the browser to determine just how many columns there should be, based on the width of the container:

Now the number of columns created is determined by the overall width of our wrapper <div> – so long the <div> can be wholly divided with columns that are 15em wide with appropriate gaps and rules, the browser will add columns. If the <div> is less than 34em wide ((2 × 15em) + 4em for the gap) the text will fall into a single column.

Text is automatically balanced between columns, by default; if you want to fill the columns from left-to-right, use column-fill: auto.

It's not currently possible to wrap column text around floated elements, although it is possible to fake the appearence of such, using a either a background image (shown above), or faking the columns themselves.

Newspaper-style columnar layout on the web remains controversial and cutting-edge. On the other hand, it does gracefully degrade. Going forward, columnar text layout will likely become a strong visual component in web pages, if used carefully and appropriately.

You may find that the lead text in the first column is out of vertical alignment with other text; this can be treated by removing its margin-top. As an example, the CSS might be:

Enjoy this piece? I invite you to follow me at twitter.com/dudleystorey to learn more.
Check out the CodePen demo for this article at https://codepen.io/dudleystorey/pen/aOqjYP 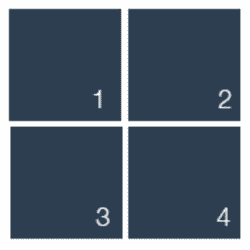