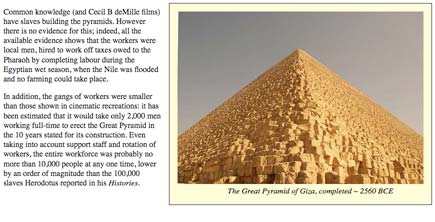 While there are many possible different methods for captioning an image, the solution I prefer in XHTML is to place the image in a definition list. This makes the most sense semantically – the image is the item we are defining, while the definition term is the caption – and is the most flexible in terms of markup.

A typical code example would be:

While this accomplishes our goal of a captioned image, it doesn’t look terribly good. First, let’s put a border on the definition list:

The appearance of this border makes it clear that the definition list takes up the entire horizontal space of our web page, as it is a block tag. The height of the <dl> is determined by the content inside it. Let’s float the element:

Note that an element is floated it essentially collapses: the width of the definition list is now determined by the widest element it contains (i.e. the image).

We’ll add a little padding, margin-left and background-color; you could also remove the border at this stage:

The <dt> content is indented by default, just as it is for <li> elements. Let’s remove that with a separate style declaration:

At the same time, we’ll improve a few things about the caption:

Now the captioned image can have content wrapped around it:

While this list contains a single example, it's entirely possible to have multiple pairs of images and captions as definition terms and matching declarations in the same list.